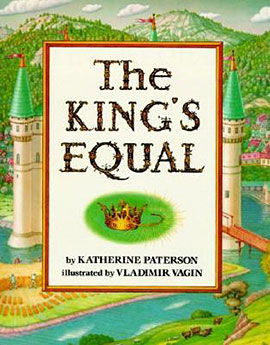 Long ago, in a country far away, a dying king makes his son, the selfish prince Raphael, ruler of the kingdom. But there is one condition: Raphael cannot wear the crown until he marries a woman who equals him in beauty, intelligence, and wealth. Where will such a woman be found? Raphael believes that no one is as smart or beautiful as he, and his greed soon makes him the wealthiest person in the land. But there is one thing he does not have: the crown to the kingdom.

Raphael demands that his councilors search the world over for the perfect princess. At last, through the powers of a magical wolf, a poor and clever young woman named Rosamund is chosen to be the king’s equal. But the story is not as simple as that. For not only must Rosamund be Raphael’s equal, but Raphael must also be hers.