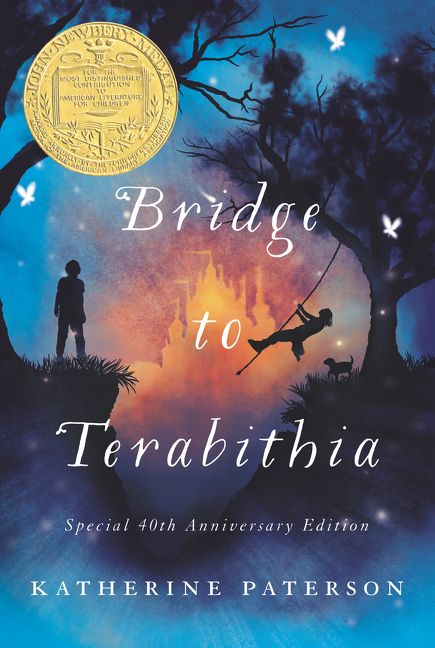 Jess Aarons had to be the Fastest runner at Lark Creek Elementary School, the best, but when he was challenged by Leslie Burke, a girl, that was just the beginning of a new season in Jess’s life. Leslie and her parents were new comers to the rural community where Jess Lived, and were thought to be a bit odd, for they didn’t even own a TV, though their house was filled with books. Some-what to Jess’s surprise, he and Leslie became friends, and the worlds of imagination and learning that she opened to him changed him for ever. It was Leslie’s idea to create Terabithia, their secret Kingdom in the woods where they reigned supreme. There is no enemy – not their teacher Monster Mouth Meyers, their schoolmates Gary Fulcher and Janice Avery, Jess’s four sisters, or even Jess’s own fears and Leslie’s imaginary foes – could defeat them. The Legacy that Leslie finally brought to Jess enabled him to cope with the unexpected tragedy that touched them all.

In 2007, Bridge to Terabithia was adapted into a major motion picture from Walt Disney Pictures. The film was directed by Gábor Csupó, written by David L. Paterson and Jeff Stockwell, and stars Josh Hutcherson, AnnaSophia Robb, Robert Patrick, Bailee Madison, and Zooey Deschanel.

Watch it on Amazon and iTunes.

“Set in contemporary rural America, the story is one of remarkable richness and depth, beautifully written.”

“15 Banned Books Every Tween and Teen Should Read.”