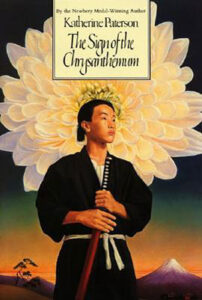 His desperate search for the father he has never seen leads thirteen-year-old Muna to danger and adventure in the crowded, colorful capital city of twelfth-century Japan. But where should he look for him? And how will he recognize him? His father left before Muna was born—and his mother is now dead. All that the boy knows of hiss father is that he is a great warrior, a samurai … and that he bears on his shoulder a chrysanthemum tattoo.

Wars between two powerful clans divide the city, making his search more difficult and dangerous. Muna is torn between his respect for Fukuji, the brilliant swordsmith who takes him into his home, and his loyalty to Takanobu, a former samurai who is now an outlaw. Tempered by fire and sword, Muna finally discovers who he really is.