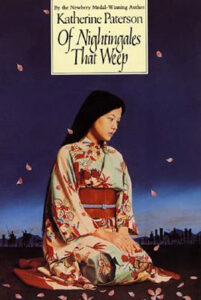 Of Nightingales That Weep

The daughter of a samurai never weeps. But Takiko, whose warrior father has been killed in the civil wars between the Heike and Genji clans, finds this a hard rule, for she resents and even fears her mother’s new husband. How can she accept this strange and ugly man, Goro the potter, as her father? When she is offered an exciting position at the Japanese court, her problems seem to have been solved. Her beauty and musical talent win her many admirers, among them the dashing young warrior—and enemy spy—Hideo.

As the war between the clans again erupts, Takiko flees the endangered capital along with the royal household, the child Emperor, and the precious Imperial treasures. The courage of all the exiles is tested in several momentous sea battles. In this dramatic setting Takiko must face the painful conflict between loyalty and her secret love for Hideo. The climax of the war and the resolution of Takiko’s own personal dilemma are unforgettably described.