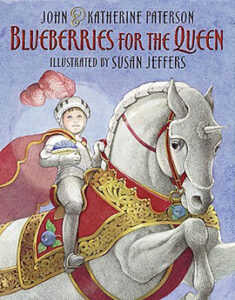 Blueberries for the Queen

It’s summertime in New England during World War II, and a boy named William likes to imagine at bedtime that he is a brave knight fighting great battles to end the war. But in the morning he is always just William again, not big enough to contribute to the war effort like the rest of his family.

Then a real queen moves in just down the road: Queen Wilhelmina of the Netherlands. William’s parents explain that the queen has been forced out of her country because of the war. Now William has his chance to do something. It may not be “war work”—it’s more like peace work—but that makes all the difference.

Susan Jeffers’s dramatic illustrations portray the compelling contrast between Williams’s imagination and the real events in the story, which are based on an actual incident in John Paterson’s childhood. Visually stunning, with an evocative, poignant telling, this is the picture-book art form at its finest.