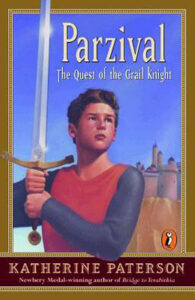 Parzival: The Quest of the Grail Knight

Parzival, raised by his mother in the wilderness, is ignorant of King Arthur and the Knights of the Round Table. Then one day, to his amazement, he meets three mounted men in shining armor. Determined to have a life of adventure, off he goes to the king’s court, wearing sackcloth and riding a broken-down nag.

Quickly gaining Arthur’s favor, Parzival wins many combats and the heart of a beautiful queen. He also learns of chivalry and honor. But when he fails to say the words that will heal a dying king’s wound, he must undertake his greatest quest-a search for the Grail, the sacred vessel of hope and eternal life.

In her masterful retelling, Katherine Paterson brings out all the wit and high drama of a popular thirteenth-century epic poem.